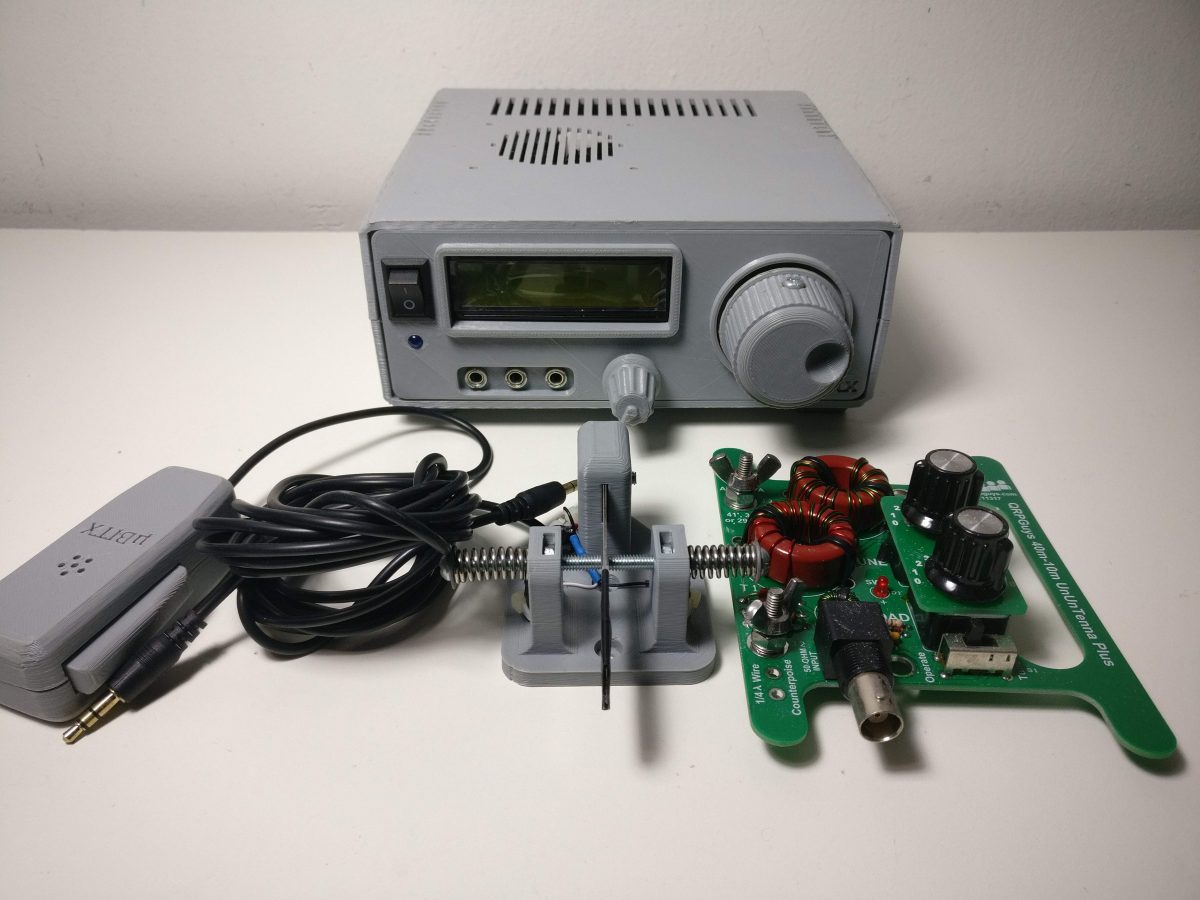 A while back, during my Amateur Radio craze, I decided to purchase a low cost, DIY QRP HF Transceiver from India. This is the uBitx. This transceiver is a fairly good option for operators who have experience building kits, and also want to get into the world of HF operation or just want another rig as a QRP on the go radio. Through my journey with this radio, I performed a lot of modifications to it, as well as created and purchased some accessories for it.

When you purchase this radio kit, it will come as a main PCB board, along with some other components. The kit only brings the bare minimum components for the kit to function, which means that it does not come with a case, a microphone case, an antenna, an antenna tuner, etc. The manufacturer suggests to fabricate a case out of cheap materials, such as lunch boxes, food containers, etc. In my case, I decided to use a 3D printed case. Luckly, there was a case which was already available on Thingiverse, made by the user DU2RK. This case consists of many different parts, two main pieces for the top and bottom of the frame, the two knobs which control the potentiometer for the volume and encoder for the frequency selection, a front panel, a back panel, and two brackets which can be printed with a transparent filament in order to have a faded light glow throw the knobs, etc.

I loved this design, but there were some issues that I found which I wanted to fix before printing the case. For starters, the designer made some parts of this case which used some components that were not included in the original kit. These were the Microphone connector and an N-connector for the antenna. Since I wanted to only use the components that came with the kit, I made some changes to the design. The first changes that I made to the case were to the front panel. I modified it for it to have a regular 3.5mm headphone jack as the microphone input. I also moved some of the positions of the knobs slightly in order to make them fit better, and added an LED with a current limiting resistor connected in parallel with the power switch. This LED allows me to see when the device is turned on. I also decided to not include the light guide rings which were located behind the knobs because I did not find much use for them and I didn’t have any transparent filament anyways. The files for this modification can be found here.

I also created a 3D Printer adapter for the back plate which allows you to use the original back plate, and not have to use an N-connector. This could be very important for the last upgrade that I made to this radio. The file can also be found in the same thing file as the front plate.

Once I printed all the parts, it was time to assemble all that stuff. The assembly mostly consisted of soldering wires to the microphone, headphone and morse key jacks, which were then connected to the using a header. To these headers were also connected the volume potentiometer and the frequency encoder. The power input power and antenna headers also needed to be soldered to their respective sockets. I added a big fuse holder on the positive 12V line, before attaching to a rocker switch. This is where the previously mentioned LED for power is also connected to. In order to reduce the incoming interfering noise, I decided to shield the case of the radio from the inside using foil tape. This tape was then connected to the ground of the device. More detailed instructions on how to properly assemble and test this device can be found in the official uBitx website.

The uBitx kit comes with some bits for you to put together a microphone and use it with your radio. For this purpose, it includes a microphone condenser and a push-button. However, you will also be missing a 3.5mm male headphone jack in order to connect both of these devices together. By the way, the push-button is used to trigger the push to talk functionality of the radio. In my case, I decided to just use a long 3.5mm male to male cable. I cut the cable in half and used one of the halves to connect the microphone and button to it.

To make the use of this microphone more bearable, I decided to make a 3D printed case for it. I wanted to make it similar to the ones made of the Baofeng radios, but at the same time, it is about half of the width as one of those. I wanted to make it so it would be very easy to hold and easy to just squish to get it to work. I ended up enjoying it the feel of it and the travel of the push-button.

The cord comes in through a whole at the bottom of both of the shells which create the microphone case. This wire is then clamped by a thin 3D printed piece, which allows for the wires not to move around. The three wires end up going to the microphone element and the button.

At some point, I wanted to give Morse code a try. Luckily, the uBitx has the ability for you to practice without transmitting CW. So, I decided to make a Morse code key which was mostly 3D printed. I decided to make it a paddle style Morse key, where you have a paddle in a middle position, and if you move it to the left, it will create a sound, and if you move it to the right, you get a different sound.

For the middle paddle, I decided to use some old thickness gauges. These thickness gauges touch two screws on each sides, which create the sound once the metals contact. These signals are send back to the radio by using the other end of that male to male 3.5mm audio cable. Two resistors are used in order to connect one of the center pins of the connector to the two sides of the key.

By far, one of the most interesting accessories for this radio that I have been able to get my hands on, was the QRPGuys UnUnTenna Plus. This is in fact, not an antenna. This is a circuit designed by the QRPGuys, which you can attach a wire antenna to. The circuit contains a tuner and a simple SWR meter.

You receive the the device as a bare PCB and the components, and you are expected to fully assemble and test the device. The device can be used in frequencies with wavelengths from 10m to 40m. To assemble it, all you need to do is solder the components in the way that their instructions describe. The most complicated part is winding the Toroid transformers. They require very precise winding for them to perform properly and play nice with the tuning capacitors.

This circuit requires a BNC male to BNC male cable in order to connect it to the uBitx. The wire antenna is connected to the two posts with wing nuts which can be seen in the picture. In order to tune the antenna circuit, you need to switch it into tune mode by using the slide switch next to the BNC connector. This enables the SWR meter, which you will tune until the meter does not light up anymore while you transmit. Once you are done tuning, you need to switch to operation mode.

In any case, that is about it for this post. This radio is a fairly good radio if you are willing to play with it and hack it. For the price and what it can do, it is not bad at all. If you add to that the UnUnTennato the combo, this becomes a fairly nice radio for operating outside or just people who need something that does not weight 30 pounds.Anyways, If you have any questions, feel free to let me know, thank you for reading!